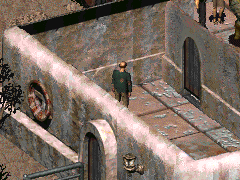 “As a good citizen, I applaud Carlson's opposition to any New Reno influence around here. Now that Westin's dead, I've been helping out with security for the Vice President.”

Merk is the head of organized crime in New California Republic in 2241.

Though Merk is, in the grand scheme of the world, a small-time crook, the lawful environment of NCR makes for little competition, and this elevates him to what is essentially the status of a local crime boss. In order to avoid the prying eyes of the vast NCR police force, Merk usually holds court in a saloon located in the outer Bazaar area of NCR. The Rawhide Saloon, well-known for its rough clientele, is a frequent haunt of Merk, who operates out of the back room.

Gaining access to Merk is not particularly easy, however; crime bosses who have an open-door policy generally do not enjoy a long life, so Merk is accompanied at all times by bodyguards who bar the casual visitor from entry to Merk's "office." However, the right connections - or an impressive show of force - catch the crime boss's attention. Typically, however, a show of force would involve the participation of the bar's resident tough guy, a super mutant named Lenny; not an easy prospect for most humans.

Despite his relative "small fry" status as far as the wasteland, and indeed places like New Reno, would consider him, Merk nevertheless is quite entrepreneurial, and runs many operations in NCR. Perhaps the highest profile is a backroom gambling establishment within the walls of NCR itself. Permission to enter the gambling den has to come from Merk himself, and anyone without the proper pass phrase was turned away.

However, the lawful mindset of NCR's government hampers Merk's efforts to build a criminal empire, leaving him seeking for outside solutions to internal problems.

Merk appears only in Fallout 2.

Retrieved from "https://fallout.fandom.com/wiki/Merk?oldid=3073176"
Community content is available under CC-BY-SA unless otherwise noted.