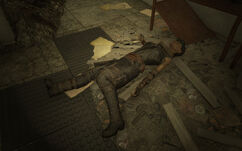 Mercy is a deceased member of the Good Fighters in the Fallout 4 Creation Club content "Capital Wasteland Mercenaries."

Mercy spent 13 years as a slave and, at one point, was sold to Paradise Falls by Phil Goodman, when he still worked as a slaver. She later escaped and got rid of her slave collar, having a mission to kill the "zombie son of a bitch" who sold her. In 2287, Mercy took a contract with Talon Company to infiltrate the Good Fighters, of which Phil Goodman was the leader. Because of her history with Phil, Mercy suspected that Talon Company knew what they were doing when they hired her. She arrived at Galaxy News Radio pretending to be an amnesiac raider and she was accepted into the Good Fighters' ranks. They gave her the name "Mercy" after Scratch's continual mispronunciation of the word "mercenary."[1]

Now that she was inside, Mercy was tasked with retrieving the building blueprints and a headcount of the Good Fighters' numbers. However, as time went on, she became attached to the ragtag group of mercenaries, and could not even bring herself to kill Phil when the two were alone. She could not forgive him for what he did, but killing Phil just felt wrong to her. Mercy went as far as tipping off the Good Fighters that Talon Company planned to attack the radio station, by telling Sparrow to go on a patrol route where she would see Talon Company off in the distance.[2] When the day of the assault came, Mercy recognized that she should have regrouped with Talon Company or made a run for it, but, because she had spent so much time with the Good Fighters, she felt like she had to take a stand and "fight the good fight."[3] In the end, that decision cost her dearly, as she was killed by Talon Company in the same place that Three Dog stood ten years ago.

Retrieved from "https://fallout.fandom.com/wiki/Mercy_(Galaxy_News_Radio)?oldid=3126354"
Community content is available under CC-BY-SA unless otherwise noted.