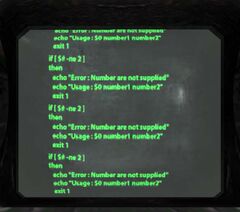 Close-up of the display screen

A veritable relic, Mercy is a pre-War US Army automatic grenade launcher that was apparently used by one of the US Army's counter-insurgency units hunting Chinese Hei-Gui commandos in the American southwest. Presumably during this period, one of its operators spray-painted Hei Gui Bye Bye on the chassis. At an undetermined time, it was obtained by the Brotherhood of Steel and continued to serve as a weapon, eventually ending up in the hands of a Paladin in the Mojave chapter. It was lost when its operator was killed while exploring Dead Wind Cavern.

Its higher damage comes at the cost of using 40mm grenades, which are less common and more expensive than the 25mm grenade used by standard grenade machineguns. The larger size of the 40mm grenades also restricts its ammunition capacity to 18 grenades, which is 12 fewer than the regular grenade machinegun. The 40mm grenade is also heavier than its 25mm counterpart, further limiting the amount of ammo the player can carry in hardcore mode without being over-encumbered. Like most unique weapons, Mercy cannot be modded. This weapon looks extremely rusted and heavily used.

Mercy can fire a total of about 2495 standard rounds, the equivalent of 139 reloads, from full condition before breaking.

Dead Wind Cavern - By a dead Brotherhood of Steel paladin along with some 40mm grenades, 40mm incendiary grenades and T-45d power armor and helmet. It is guarded by various types of deathclaws and the legendary deathclaw.

This gun is related to Vengeance from Fallout 3, in the fact that both guns are very powerful, are heavy weapons, found in the main deathclaw caves, and their names are antonyms of each other.

The writing on the "display" is easily recognizable as part of a Bash script, a scripting language that is used for UNIX and UNIX-like operating systems like Plan9, Linux, BSD, Darwin, or MacOS. The script that the display shows seems to be a repeated conditional that prints an error, prints the correct usage, then exits with an error.

The screen display and the spray-painted graffiti 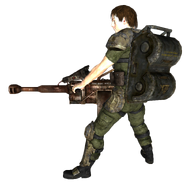 A person holding the machinegun (side view) 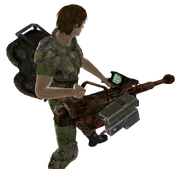 A person holding the machinegun (up view)