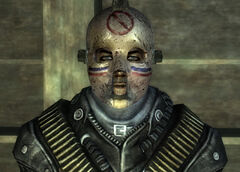 “Mercier didn't make it? Damn! How do they expect us to play when we don't even have enough people on our team?”— Goalie Ledoux

Winger Mercier was a member of the gang Sudden-Death Overtime. He is found dead in the Nuka-Cola plant in 2277.

Mercier was a member of a gang called Sudden-Death Overtime, obsessed with an ancient ice sport that Goalie Ledoux's ancestors played. Winger Mercier was sent to procure a secret formula for a new type of Nuka-Cola while Ledoux made contact with the buyer. Mercier has been gone an awfully long time,[1] because of his sudden death in the factory.

Winger Mercier appears only in Fallout 3.

Mercier without his mask