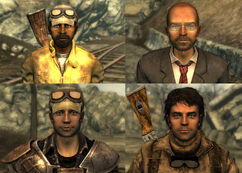 “I hear you're the one who's so deeply invested in my junk. Not as deeply as me, of course, but who is, really? I picked up some Stealth Boys the other day, and they seemed like just the way to thank you for your investement. Kudos!”— Crazy Wolfgang

Merchant Empire is an unmarked quest in Fallout 3.

Through discussion with Uncle Roe in Canterbury Commons, he can be asked if the traders coming through the area could become a unified group. If Lone Wanderer has the Master Trader perk, a high Barter skill, the Black Widow perk or is carrying at least 250 bottlecaps, Roe will offer a map showing the paths of the merchants and their various trade stops and the option of investing into any of the caravans. Investing in a caravan allows that merchant to sell a wider variety and higher quality of items. It also raises their Repair skill, allowing them to restore gear to near perfect condition, as well as the number of caps they have available for trading.

The first time speaking with a merchant after investing fully in their caravan will present a gift of gratitude. The gift differs for all four caravans, one of which includes the unique helmet, Crow's eyebot helmet.

The following merchants correspond to the investments:

The amount of caps available depends on the Lone Wanderer's level and is random to a certain degree. Caps replenish every 72 hours, but they are also retained, for example: those who routinely use Crazy Wolfgang for repairs will end up seeing higher available caps totals, in some cases extremely high.

When talking to each of the merchants for the first time, they might speak their normal introduction. Ending the conversation and speaking to them again will produce the correct reward dialogue. [verified]

Retrieved from "https://fallout.fandom.com/wiki/Merchant_Empire?oldid=3349077"
Community content is available under CC-BY-SA unless otherwise noted.