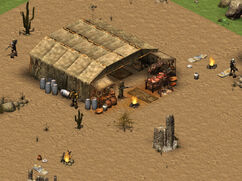 The merchant in his well guarded hovel

Merchant is a special encounter in Fallout Tactics.

In this encounter, you'll find a merchant surrounded by several armed guards. You can trade items and ring pulls to the merchant for a number of weapons, including an FN FAL, Gauss pistol, and a Browning M2.

The guards are equipped with various small guns, including an AK47 and 9mm M9FS Beretta.

In the patched version (v 1.27); the merchant will not sell the Browning M2 however he will still drop it when he dies. The guards will use a Pancor Jackhammer instead of an AK47.

Retrieved from "https://fallout.fandom.com/wiki/Merchant_(special_encounter)?oldid=2795485"
Community content is available under CC-BY-SA unless otherwise noted.