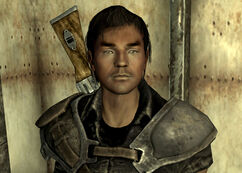 “Leave me out of that girl's crazy experiments. I don't get paid enough for that.”

The mercenary is a guard hired by Moira Brown to protect Craterside Supply in 2277.

The mercenary that Moira Brown hired to guard her properties is notorious for his supposed restless nature, as he is never witnessed sleeping during store hours.[1]

He is a bit self-centered, judging by his gravelly voice and the fact that he does not seem to like anyone. Regardless, this mercenary never questions his job of protecting the inventory of Craterside Supply, and his very presence is enough to thwart shoplifters.

He stays out of the way of Moira's scientific pursuits, taking care that he has no business intervening in his employer's crazy experiments since it is not part of his contract.[2]

The mercenary can be found in Craterside Supply leaning against the wall on the left, next to a usable workbench.

The mercenary appears only in Fallout 3.

Retrieved from "https://fallout.fandom.com/wiki/Mercenary_(Megaton)?oldid=3460752"
Community content is available under CC-BY-SA unless otherwise noted.