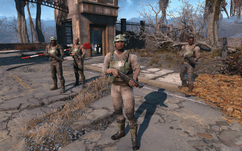 Mercenaries are characters appearing in the Commonwealth in 2287. Several mercenaries can be found outside Parsons Asylum.

The mercenaries are a security for hire group. An example of which can be seen as security guards, as seen at the Parsons State Insane Asylum, or as bodyguards such as the ones that accompany the traveling merchant Smiling Larry. Most mercenaries usually are found carrying the combat rifle as their weapon of choice. Mercenaries will be neutral towards the Sole Survivior when they encounters them, but (if guarding a site) they will warn the player character not to trespass, or after trespassing to move outside the property perimeter and will passively escort them out.

Two mercenaries working as bodyguards of Smiling Larry.
Add an image to this gallery
Retrieved from "https://fallout.fandom.com/wiki/Mercenary_(Fallout_4)?oldid=3108510"
Community content is available under CC-BY-SA unless otherwise noted.