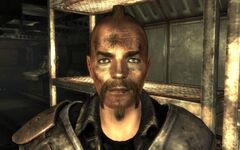 The Anchorage Memorial mercenary is a deceased mercenary found in the depths of the memorial's facility.

The merc was hired by an unknown force to eliminate their competition from the area. Specifically, the employer wanted to get rid of a group of wastelanders working in the depths of the memorial, raising and butchering mirelurks, and selling their meat for money. He was promised better job opportunities should he be successful in sabotaging the wastelanders.

Sometime before the player character enters the memorial, the mercenary unleashed the mirelurks before he met his end.

The Anchorage Memorial mercenary appears only in Fallout 3.

Retrieved from "https://fallout.fandom.com/wiki/Mercenary_(Anchorage_Memorial)?oldid=3267614"
Community content is available under CC-BY-SA unless otherwise noted.