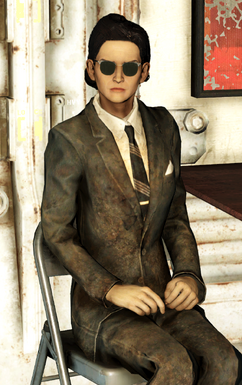 Mercedes "Mercy" Stern is a Secret Service agent in Appalachia in 2103.

Mercedes is one of the Secret Service agents located in Vault 79. She runs security and was a three-time marksman champion.[1] She is also very protective of her daughter, Maggie, and is willing to put down any potential threats to her safety without a second thought.[2]

She survived Shorty's mutiny years earlier as well as the more recent reactor malfunction. She and a few other agents as well as her daughter locked themselves in a small part of the vault to protect themselves from feral ghouls and rogue security systems. Now, they are running out of supplies and will need rescue.[3]

Mercedes Stern appears only in Fallout 76, introduced in the Wastelanders update.

Retrieved from "https://fallout.fandom.com/wiki/Mercedes_Stern?oldid=3371717"
Community content is available under CC-BY-SA unless otherwise noted.