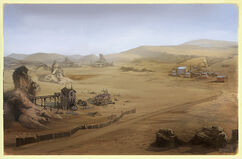 Menkey Butte Mine on the left.

The Menkey Butte Mine, commonly known as Monkey Butt Mine after the War,[1] is a location mentioned in The Armageddon Rag.

The Menkey Butte Mine was originally a silver mine,[2] now disused it may still contain something of value, at least to Les and an unnamed partner, who are going to great lengths to find it. What or who can be found there now is unknown.

Retrieved from "https://fallout.fandom.com/wiki/Menkey_Butte_Mine?oldid=3386902"
Community content is available under CC-BY-SA unless otherwise noted.