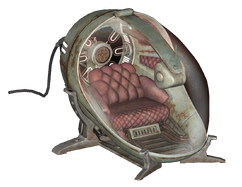 The memory lounger is a world object in Fallout 4.

Memory loungers are the tool the Memory Den uses to provide its clients with the ability to relive their memories, which are transmitted between their brains and loungers' computers.[1] The exact origin of the loungers is unknown, and something Irma wants to keep a secret,[2] but the only person who has the years of neural physiology knowledge required to understand their technology is Doctor Amari.[3] The lounger consists of a large glass pod with a soft chair inside for its user. A television screen drops down when the pod is closed to display images.

The memory loungers around found in the Memory Den, in Goodneighbor.

Memory loungers appear only in Fallout 4.

Retrieved from "https://fallout.fandom.com/wiki/Memory_lounger?oldid=3184622"
Community content is available under CC-BY-SA unless otherwise noted.