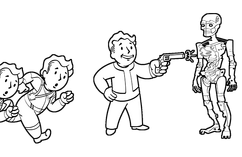 Memory Interrupted is a Railroad side quest in Fallout 4.

Back at Railroad HQ, Desdemona and Doctor Carrington can be found discussing a safe way to transport H2-22 after his memories were altered by Dr. Amari. P.A.M. will tell the group about increasing Institute activities, which will start a discussion between Desdemona and Carrington on how the Railroad should react. While Desdemona suggests rerouting the path, P.A.M. and Carrington will state that the safest way is to eliminate any synths blocking the original route. The Sole Survivor will have the option to side with one of the two parties. However, even if they side with Desdemona, she will concede that rerouting is not an option and go with Carrington's plan to eliminate the synths on the original route.

The Sole Survivor is sent to Dr. Amari to tell her about the new plan. After a conversation, Amari will tell the Sole Survivor to grab the Goodbye from H2-22 holotape from the table, which contains a personal message from H2-22 (although the conversation with Amari may take place elsewhere, "the table" in question is the round one with the red tablecloth behind Irma on the first floor stage).

The Sole Survivor is then sent to Malden Center to eradicate any Gen 1 synths in the area. Before entering the station, they run into Glory, who was accidentally sent to accomplish the same mission. Together, they must destroy all the synths there, even though Glory constantly comments on the fact that she believes even Gen 1 synths should be rescued (e.g. asking if they couldn't just scare them away). It is also possible to dismiss Glory by saying that her help is not required, upon first meeting her outside of the station. In this case, she will return to Railroad HQ, leaving the Sole Survivor to clear the area on their own.

Afterward, the Sole Survivor should return to Desdemona for the reward.

Desdemona does not have dialogue for reporting back to her if The Molecular Level is active and the stage where a supporting faction must be chosen has been reached, making it impossible to finish this quest until one proceeds in The Molecular Level. [verified]

Retrieved from "https://fallout.fandom.com/wiki/Memory_Interrupted?oldid=3443924"
Community content is available under CC-BY-SA unless otherwise noted.