The Memory Den is a location within Goodneighbor in 2287.

Upon entering, there is a large hall filled with memory loungers, some of which are in use. These loungers are used to access the past memories of the occupant. There is an entrance hall, main room, and basement. To the side of the main hall is Kent Connolly's living quarters. His room is filled with Silver Shroud memorabilia.

The Memory Den appears only in Fallout 4.

The Memory Den's façade and marquee are modeled after those of the Gordon's Olympia Theatre, near Boylston Street in the then-theater district of Boston, Massachusetts. The building was demolished in 1996.

Goodbye from H2-22 found on a table during Memory Interrupted 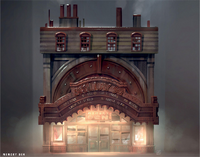 Memory Den in an endings slide
Add an image to this gallery
Retrieved from "https://fallout.fandom.com/wiki/Memory_Den?oldid=3287957"
Community content is available under CC-BY-SA unless otherwise noted.