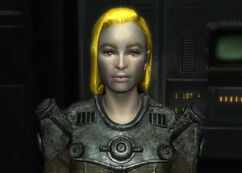 “Yeah, a lot more. Back when we were at the HELIOS station. Er, crap.”

Apprentice Melissa[1] Watkins is an apprentice of the Mojave Brotherhood of Steel in 2281. She spends her time wandering around inside the Hidden Valley bunker.

Watkins is an apprentice with the Brotherhood of Steel and has recently became eligible for journeyman status. Both of her parents died during the defense of HELIOS One and she has to choose if she wants to follow her mother, a paladin, or follow in her father's footsteps and become a scribe.

Retrieved from "https://fallout.fandom.com/wiki/Melissa_Watkins?oldid=3152618"
Community content is available under CC-BY-SA unless otherwise noted.