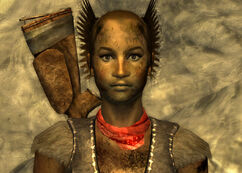 Melissa is a Great Khan member camped out near Quarry Junction in the Mojave Wasteland in 2281.

Melissa is the daughter of Chomps Lewis and a member of the Great Khans.[3] She was not born a Khan, but joined them after going through harsh initiation rituals.[4] She and two other Khans are awaiting a chems shipment at the Great Khan Encampment above Quarry Junction.[5] Normally, the supplies would be stashed in a quarry machine at Quarry Junction, but because of the deathclaw infestation, she suspects it's still in Sloan and needs help getting it from her contact.[6] While she does not have much to offer, she would be grateful to whoever helps by spreading a good word about them within the Great Khans.[7]

Melissa holds a position of responsibility[8] within the Great Khans, as leader of their scouts, which double as drug runners.[1] She, like the rest of her tribe is wooed into the alliance with Caesar's Legion. Totally fooled into believing that she has all the makings of a speculatore, completely unaware that Caesar's Legion does not allow women into its ranks.[8]

Melissa is completely unrelated to Jessup and McMurphy that ambushed the Courier with Benny, and does not know of any other Great Khan gangs as far into NCR territory as she is (not that she would willingly out a fellow Great Khan).[9]

Retrieved from "https://fallout.fandom.com/wiki/Melissa_Lewis?oldid=3235292"
Community content is available under CC-BY-SA unless otherwise noted.