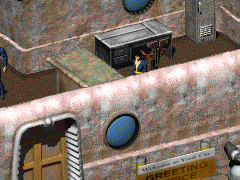 “- You don't seem capable of understanding what we're doing here.
- You're right. I can't understand it because it doesn't make any sense.”— Melinda and the Chosen One

Melinda is the incredibly stiff and high strung greeting officer for Vault City in 2241.

She can be described as an utter fanatic, believing that her city is the only true oasis of civilization in the wastes and the mistreatment of the "Outworlders," which it is actually her job to greet, is a good thing. Her only use is as a means of introducing the Chosen One to the bigotry and hypocrisy that defines Vault City's society. She is a perpetually tense person who has not relaxed in years.

After one has finished their conversation with her in an overly questioning fashion, being what she feels is a disrespectful way of talking of Vault City and its structure, she will no longer engage in conversation and will instead refer the Chosen One to her subordinate.

Melinda appears only in Fallout 2.

Retrieved from "https://fallout.fandom.com/wiki/Melinda_(Fallout_2)?oldid=3345761"
Community content is available under CC-BY-SA unless otherwise noted.