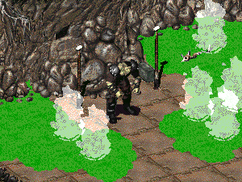 “Behold, I am the greatest magician in the world!”

Melchior the Magnificent[1] is a super mutant who resides in the fourth level of the Mariposa Military Base facility in 2241 in front of a steaming pit of radioactive goo.

Once a regular Redding miner with a hobby focusing on magic tricks, Melchior's life took a turn for the worse when he was abducted by Enclave troops for slave labor in the Mariposa base. The event was witnessed by his son, Melchior Jr., who suddenly found himself orphaned.[2]

Melchior and several other abductees were put to work removing tons of rock from the collapsed military base. Working without any protective gear, the slaves were exposed to FEV dispersed in the ruins and slowly began to mutate. The process was gradual, but noticeable. With the changes came the realization that the Enclave was going to execute them all once the work was complete.

That's where Melchior's talents came into play. He helped secrete away weapons and ammunition from their Enclave overseers, preparing an uprising. As the Enclave scientist retrieved a pure FEV sample and left together with the bulk of the Enclave's forces, the mutants attacked Captain Pickard's mop up crew. Sustaining heavy casualties, the troops fell back under the force of the onslaught and blew the entrance to the base, sealing Melchior and his mutants within.

Melchior appears in Fallout 2 and is also mentioned in Fallout Bible.

Melchior shares his name with one of the Biblical Magi.

Retrieved from "https://fallout.fandom.com/wiki/Melchior?oldid=3148352"
Community content is available under CC-BY-SA unless otherwise noted.