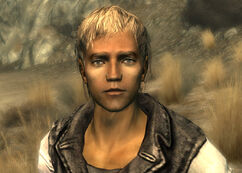 “You've done this before, haven't you? Fine time for me to be out of bullets...”

Mel is a wannabe mugger the Lone Wanderer may come across during the Locked and Unloaded random encounter. He wants the player character to give him all of their caps. He will appear as friendly on the radar, and his clearly unassertive and stammering speaking voice makes his demands indeed pathetic.

Recently forced out of his mercenary settlement, Mel is a nervous and ineffectual highwayman, waving an unloaded weapon at the Lone Wanderer should their paths ever cross. He is of no threat, except to himself.[1]

There may be several conversation options, depending on the skills:

If a skill-based topic is used, Mel will end the conversation without turning hostile and will cower as if fleeing. If one refuses to be give anything, he may turn hostile. Mel will also fight any roving hostiles that travel near him (i.e. raiders or critters). But, since his shotgun is unloaded, he is limited to fighting unarmed. He is about as tough as an average raider, although, without weapons, he poses a limited threat.

Mel appears only in Fallout 3.

Retrieved from "https://fallout.fandom.com/wiki/Mel_(Fallout_3)?oldid=3186320"
Community content is available under CC-BY-SA unless otherwise noted.