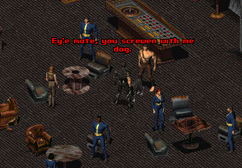 “It is a man in black. And he doesn't seem too happy.”— Mel's description

Mel is a character from the Café of Broken Dreams special encounter in Fallout 2.

He was the original owner of Dogmeat. While he is not named in Fallout, he is called a "traveller" who wore leather, carried a shotgun and had a funny accent according to Phil of Junktown. The man claimed to have come from the east, though Phil didn't believe him as he didn't think anyone could make it past the harsh deadlands in the east. He interfered in Gizmo's business. Gizmo in retaliation hired thugs who assaulted him and threw him off his casino's roof.

Clad in leather, he appears out of nowhere and attacks the Chosen One in Café of Broken Dreams if they hurt Dogmeat while the dog is not a companion.

Mel appears only in Fallout 2. He is mentioned in Fallout though simply called as a "traveller."

Mel is a reference to Mel Gibson, the actor who played Mad Max in the film of the same name.

Retrieved from "https://fallout.fandom.com/wiki/Mel_(Fallout_2)?oldid=3261920"
Community content is available under CC-BY-SA unless otherwise noted.