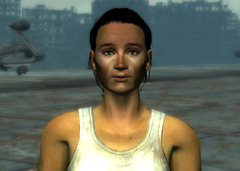 Mei without her head wrap

Mei Wong is a former slave staying in Rivet City in 2277.

Quiet and guarded, 30-year-old Mei doesn't like to talk. Mei was a slave owned by Allistair Tenpenny, but she recently escaped and is in hiding. Harkness knows her story and has promised her she's safe while she's in town. She's a good source of information about slavers and was once held at Paradise Falls. Mei Wong suspects that Sister is a slaver but can't prove it. She is terrified of him. Fortunately for her, he does not recognize her at all.[1]

She was born in 2247.[1] She lives in the common room of Rivet City and can usually be found there or in the Rivet City market. Mei can sometimes be found outside, wandering the flight deck, near James Hargrave and C.J. Young's baseball field.

* The gun will appear only if you choose to provide her with 25 caps to buy a weapon from Flak 'N Shrapnel's.

Mei Wong appears only in Fallout 3.

Mei Wong in an endings slide