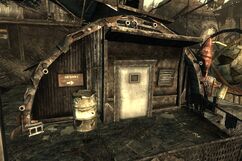 “Ready to die for your country, you commie son of a bitch?”— Deputy Steel as the player breaks in

The Megaton armory is the town's most heavily secured location. The armory is Megaton's primary weapons and ammunition storage area. It also houses the computer terminal used to control both Deputy Weld and Deputy Steel.

The armory has a very hard lock on the door. Deputy Steel waits in front, ready to protect the arsenal from thieves. To the right is a counter with two hunting rifles, a combat shotgun and three Chinese assault rifles. In the back, there is a cabinet and beside that is a terminal protected by a hard lock which allows the player to deactivate Deputy Weld and Steel. Along the left wall is a ruined couch.

The Megaton armory appears in Fallout 3.

If the player initiates combat with Deputy Weld (the protectron outside of Megaton), Deputy Steel and Lucas Simms will come to back him up, which may remove Deputy Steel from the armory. In the newer versions of the game (i.e. Game of the Year Edition) this option is not possible; Deputy Steel keeps his place in the armory and no one moves into Deputy Weld's position outside Megaton. [verified] 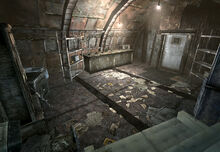 Megaton Armory seen from the inside.

Add an image to this gallery
Retrieved from "https://fallout.fandom.com/wiki/Megaton_armory?oldid=3244109"
Community content is available under CC-BY-SA unless otherwise noted.