Fallout 3
“Welcome to Megaton. The bomb is perfectly safe. We promise.”— Deputy Weld

Megaton is a fortified settlement in the Capital Wasteland in 2277. This shantytown is built around a crater with an undetonated megaton class atomic bomb at its center, after which the town is named. The town of Megaton is protected by large metal walls made from various scavenged materials, primarily the scraps of old pre-War airplanes, which were assembled and reforged together several decades ago by the founders of Megaton in an effort to make the town safer. With 28 named inhabitants, ten unnamed Megaton settlers, and four Children of the Atom, it is surpassed only by Rivet City in terms of population.[1]

Megaton's crater was first settled by a large group of people who either worshiped the undetonated bomb or sought shelter in Vault 101, but was denied access because the vault dwellers were not allowed to leave or let anyone in as part of the vault's experiment. Locked out of the vault, these settlers, including Manya Vargas' great grandfather, simply settled into the crater for protection against dust storms. After the storms died down, some people began to wander the wastes but would return to the crater to trade their scavenged goods. A generation later, the crater had turned into a full-on trade hub.[2] Vargas' father became wealthy on these caravan routes and eventually convinced others to build the scrap metal wall surrounding the town to repel raiders.[2]

Construction on the wall started in 2241. Early that year, raiders attacked the town, resulting in the death of the 14-year-old Colin Moriarty's father. After the raid, Moriarty inherited his father's wealth and his bar, Moriarty's Saloon.[3][4]

Over the course of a couple of months, the residents of the town built the walls out of necessity; aircraft debris from an air station a few miles from the crater was the only material that remained and was readily available.[5][6][7] The bomb in the center of the crater remained there; when the wall was being erected, the settlement needed as much manpower as it could get and removing the bomb would have upset those that worshiped it, pushing them away. That is not to say a lot of other people felt it was best to not disturb it; it was not hurting anything and it could have adverse effects if transferred to another location.[8]

In February 2241, an expeditionary party of Vault 101, led by Anne Palmer and sent by the overseer of the vault, made contact with the residents of Megaton. Initially, the locals were cautious of the strangers before eventually accepting and welcoming them into their settlement. Palmer appointed two vault residents, Agnes Taylor and Lewis, as vault ambassadors to Megaton.[9]

By the time of the expedition, the front gate of Megaton had been completed.[10]

In 2277, space is limited in the town, forcing many residents to live in the common house, a building that would usually be reserved for meetings and voting.[11] Lucas Simms is the self-appointed town sheriff and does not hesitate to throw anyone out if they cause trouble.[12][13] On the subject of trouble, Colin Moriarty runs the town saloon and has a less than decent reputation, keeping the drunks drunk and his employees in servitude. Moriarty has a line on everything that happens in Megaton and it all eventually gets back to him.[12][14]

In early 2277, a gang of raiders occupied nearby Springvale Elementary School, intending to tunnel from the school basement into Vault 101. A group, led by Boppo, staged a raid on Megaton, but the attack was foiled when Boppo was shot in the head and killed by Lucas Simms. The raiders did not leave the area, though, choosing to remain at the Springvale School in order to dig a tunnel into Vault 101. Their mining operation stopped when they opened a nest of giant ants.[15][16]

In the years following Lyons' Brotherhood's victory over the Enclave and recapture of Project Purity, Megaton prospered immensely. Following the death of Sheriff Lucas Simms, his son Harden took on the role. Moira Brown published and distributed her Wasteland Survival Guide across the expanse of the American wasteland by way of traveling caravans. By October 10, 2297, Brown was working on a new book, a compilation of "the best and most useful tales of the Lone Wanderer for the next generation."[17]

“The residents of Megaton feel safe behind their metal walls. Ironic, considering their proximity to a live atomic bomb.”— Fallout 3 loading screen

The city of Megaton has been built in a steep-walled crater around an undetonated atomic bomb, which rests in a small pond of radioactive water at the bottom of the depression. This gives the city two roughly circular levels centered on the bomb. The main gate consists of two old aircraft wings and is powered by a jet engine, which can be opened and closed to protect the town's only entrance/exit.

Following the entry path to the bottom of the depression, the Megaton clinic will be on the right and The Brass Lantern on the left. Just past the bomb to the right is the Children of Atom building and past it to the left lies Mister Burke's house. Confessor Cromwell will be found here standing in the puddle and sermonizing to random Megaton settlers.

Turning right immediately upon entering and following the lip of the crater counter-clockwise will lead past Lucas Simms' house, around the water processing plant, down to Craterside Supply, then back up to the men's restroom, Moriarty's Saloon and Billy Creel's house. Going down the ramp from there will lead around Nathan and Manya's house (a blue bus) and to the women's restroom. Craterside Supply can also be easily reached by taking the ramp directly to the right of the Megaton clinic.

Turning left instead of right at the upper lip will lead to a locked house (which is a reward from Lucas Simms for deactivating the central atomic bomb and will subsequently be renamed My Megaton house), followed by Jericho's house. From there, going down will lead to Lucy West's house while going around to the left will lead to the end of the righthand path.

The Megaton armory, only accessible by either picking the very hard lock or with Lucas Simm's key, can be reached by going up the ramp and around the Church of the Children of Atom to the right or by going down the hill starting from the back door of Moriarty's Saloon. Inside, the player character will face a strong opponent, Deputy Steel, a unique Mister Gutsy.

In front of the city, outside the walls, is a caravan stop; Micky the water beggar; and Deputy Weld. Behind the city, near the southwest corner, between a group of three scorched trees is the hollowed-out rock.

Revisiting Megaton's ruins after blowing it up in The Power of the Atom, the Lone Wanderer will find Deputy Weld's head with an orange (or purple) eye nearby, sticking out of a pile of debris. He says, ironically, "Welcome to Megaton. The bomb is perfectly safe. We promise. Please hold," in a garbled voice that sounds broken. The town will be completely inaccessible, as a high wall surrounds it. The sky will be green.

If the Wasteland Survival Guide quest has been started, Moira Brown will survive as a ghoul and show up to mention that she is relocating to Underworld. If the quest is not started, Moira can still be found in Underworld. If Jericho was hired and is following the player character at the time of the detonation, he will linger around the ruins for later recruitment. Detonating the bomb before retrieving the Strength Bobblehead will render it unobtainable. The area around Megaton will contain progressively higher levels of radiation closer to the town's ruins, up to 11 rads per second. Ground zero (only reachable using tcl) will count 26 rad/s.

* Potentially, depending on quests completed.
** 0-1 prior ordinarily, 3-4 after completion of Holy Water, if Modified FEV was used during Take it Back! 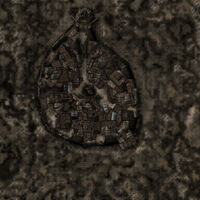 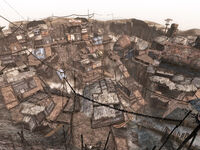 Pointing the way to Megaton!

The namesake of town and source of trouble

The nuclear bomb being detonated 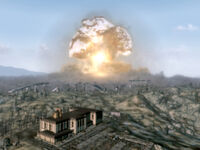 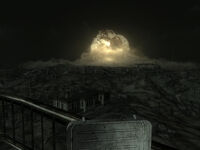 Blowing up the town at night

Change of the map marker name to Megaton Ruins 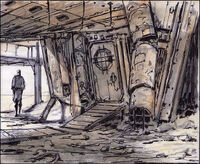 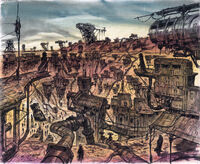 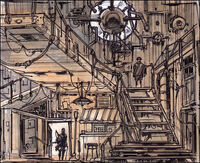 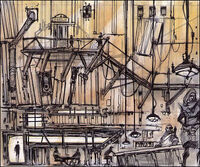 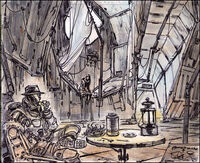 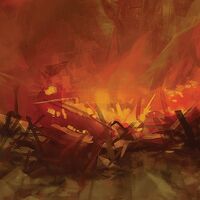 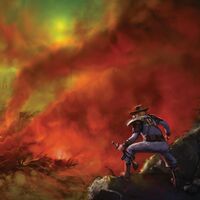 Lone Wanderer on the ruins of Megaton, concept art by Joe Sanabria 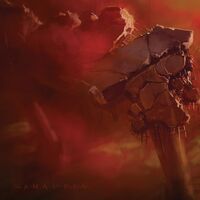 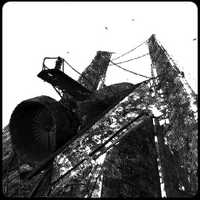 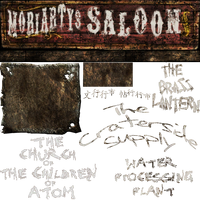 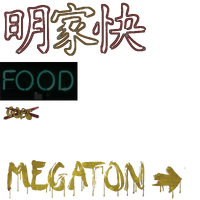