Mega sloths are cryptids found in Appalachia in 2102.

It is unknown where the mega sloths of Appalachia come from. It is noted, that Isaac Garrahan owned several sloths at his family's estate before the Great War. They are recorded to have escaped the enclosure on at least two occasions,[1][2] and visiting the sloth cages at the Garrahan Estate shows no sign of sloth remains. It can only be assumed that these sloths escaped from captivity into Appalachia as they have done before.

Mega sloths are notable for their massive size compared to their unmutated origins. Much like their unmutated cousins, the mega sloths allow the growth of algae and mold on their fur but serves a different purpose than camouflage. The mold and algae growth was further mutated along with the sloths from the latent radiation of the Great War, creating a new species of mushroom only known as a megasloth mushroom. These mushrooms share a symbiotic relationship with the mega sloths. They grow on the back parts of mega sloths to sustain themselves, and remain largely untouchable by other herbivores. The mega sloths, in turn, get an effective defense mechanism where a spore cloud bursts mushrooms on its back when aggressors get too close.

The mega sloth is a three-toed sloth mutated by radiation. Standing over nine feet tall, its body is covered with filthy and shaggy fur with clusters of mushrooms growing in the fur on its back (similar to how real-life sloths allow fungus to grow in their fur). They have heavily calloused patches of skin and a mouth full of sharp teeth. The mega sloth is also highly aggressive and fast, at least by sloth standards.

Mega sloths can be found walking about, particularly throughout the Mire and Cranberry Bog. Though not immediately hostile, they may become aggressive if the player character gets too close. They will then use their claws to scratch and throw rocks, and they may even release fungal spores from the mushrooms growing on their backs. They are tough, quick-footed and can deal heavy damage to an unarmored target. Some can be found dangling from large trees, similar to gulpers.

A scaled down mega sloth, encountered during the Mama's Rage random encounter.

A weaker variant of the mega sloth that can be encountered at a lower level.

A base variant of the creature, with the attributes mentioned above.

A slightly stronger variant, most commonly encountered in more difficult zones such as the Mire.

A stronger variant of the mega sloth that can be encountered at a higher level.

A mega sloth that has become inundated with radiation, to the point of luminescence.

This variant is encountered during Nuclear Winter.

A mega sloth that has been infected with the Scorched Plague.

A mega sloth one can only encounter during the limited time Primal Cuts event quest in the Toxic Valley.

Mega sloths are mentioned by name in the Pioneer Scout exam collector, despite the terminal being pre-War.

The mega sloth may be a reference to prehistoric giant ground sloths, some varieties of which could be the size of elephants. The first fossil evidence of these creatures was discovered in a cave in Greenbrier County, West Virginia.

When a mega sloth dies, it may freeze in place and not play its death animation. Its corpse can be clipped through, and looting it will be impossible.[verified] 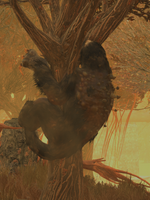 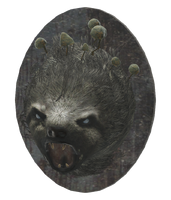 Mounted mega sloth
Add an image to this gallery

Retrieved from "https://fallout.fandom.com/wiki/Mega_sloth?oldid=3333306"
Community content is available under CC-BY-SA unless otherwise noted.