Before the Great War, Isaac Garrahan owned several sloths at his family's estate. They are recorded to have escaped the enclosure on at least two occasions, and the lack of sloth remains in the cages at the Garrahan Estate implies they escaped again following the War.[3][4]

The mega sloths are three-toed sloths mutated by radiation. Standing much taller than the average human, their body is covered with filthy and shaggy fur with clusters of mushrooms growing in the fur on their back, similar to fungus grew in the fur of pre-War sloths. They have heavily calloused patches of skin and sharp teeth. Mega sloths are much larger than pre-War variants. Similar to those that lived before the war, mega sloths found in Appalachia have mold and mushrooms growing in their fur. These megasloth mushrooms release clouds of spores when the sloth shakes its body, deterring aggressors that get too close.

Unlike most creatures, mega sloths may not be immediately hostile; they will ignore anything that is not attacking them. Mega sloths can be found throughout the Mire and Cranberry Bog. Some can be found dangling from large trees, similar to gulpers. In close proximity, they can use their claws to scratch, dealing heavy damage. From afar, they may hurl rocks or shake to release a cloud of fungal spores from the mushrooms growing on their back, which clouds one's vision.

The mega sloth is a reference to prehistoric giant ground sloths, some varieties of which could be the size of elephants. The first fossil evidence of these creatures was discovered in a cave in Greenbrier County, West Virginia.

When a mega sloth dies, it may freeze in place and not play its death animation. Its corpse can be clipped through, and looting it will be impossible. [verified] 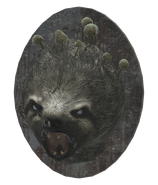 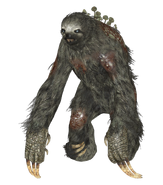 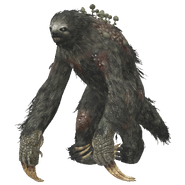 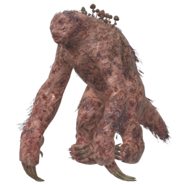