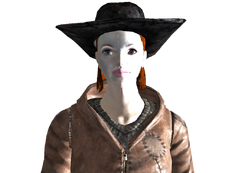 Meg Reynolds was the mayor of an area called the Underpass which does not exist in the game (though according to its cell name, Carlyle St. Clair's house is located there).

She was likely the quest giver for a removed mini-quest which involved fixing a water purifier. While the quest exists in name only, the unused message for solving it is still around:

"This purifier would provide clean water to Underpass, if it were functional. Whoever assembled it had no idea what they were doing - many parts are connected incorrectly or hooked up backwards. Someone with the proper knowledge could easily get the purifier operational."

Meg Reynolds was added during the development stages of Fallout: New Vegas, but was cut from the final retail release of the game.

Retrieved from "https://fallout.fandom.com/wiki/Meg_Reynolds?oldid=3211441"
Community content is available under CC-BY-SA unless otherwise noted.