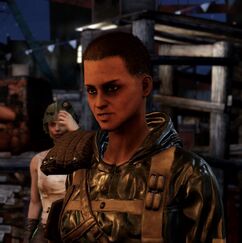 Meg Groberg is the leader of the raiders in Appalachia in 2103. She was previously a member of the Diehards.

While she was a member of the Diehards, Meg believed that Margie McClintock's ideal of the pacifist raider life was unrealistic and often disobeyed the Diehards' standing order to not fire unless fired upon.[1] At some point before the Scorched Plague entered the Savage Divide, Meg had splintered off from the Diehards and left Appalachia entirely with several other Diehards. In 2103, Meg returned to Appalachia with her raider group, having grown exponentially in the previous years, to take ownership of the crashed Valiant-1 space station, dubbing it the Crater.

Meg Groberg is mentioned in Fallout 76 and appears in its add-on Wastelanders.

Retrieved from "https://fallout.fandom.com/wiki/Meg_Groberg?oldid=3198190"
Community content is available under CC-BY-SA unless otherwise noted.