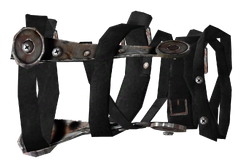 The medical brace is a miscellaneous item in Fallout 3 and Fallout: New Vegas.

The medical braces are actually two different items sharing the same name. The regular version is frequently found in various locations throughout the Capital Wasteland, has a value of 10 caps and can be used as a crafting component for the deathclaw gauntlet. The new version is exclusively found on level 3 inside Raven Rock, has a value of 1 cap and cannot be used to create custom equipment at all. Just like most other miscellaneous items, both can be loaded into the Rock-It Launcher and used as ammunition.

In Fallout: New Vegas, the (regular) medical brace is used to produce doctor's bags at a workbench. The new version exists only in the game files.

Retrieved from "https://fallout.fandom.com/wiki/Medical_brace?oldid=3484892"
Community content is available under CC-BY-SA unless otherwise noted.