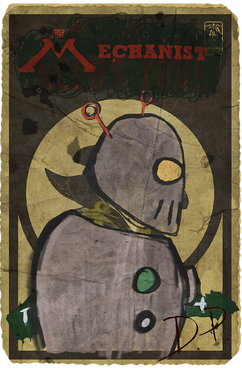 “My robotic children, my glorious creations! We stand tonight at the dawn of a new era. For too long the human vermin of Boston have destroyed this fair city. The flesh is weak, but steel! Steel is strong. You, my children, will usher in a new age, an age of robots led by me! Your father, the Mechanist!”

The Mechanist, actually Mayor Murphy in disguise, was a fictional villain in the Fallout world, being an antagonist to the Silver Shroud.

In the Silver Shroud radio series, the Mechanist, actually Mayor Murphy of Boston, believed that humanity was weak and should be replaced by his own robot army. Included in this army were the mobster Fat Fahy and a group of mob-bots. Wishing to take down the crimefighter Silver Shroud, Mayor Murphy created a robot version of himself and set the robot to meet with Fat Fahy and die, in order to lure in Silver Shroud and the Mistress of Mystery. When the two investigated the mayor's death, they discovered that he and his accomplices were robots serving the Mechanist.

The Mechanist is only mentioned in Fallout 4.

Retrieved from "https://fallout.fandom.com/wiki/Mechanist_(Fallout_4)?oldid=3267046"
Community content is available under CC-BY-SA unless otherwise noted.