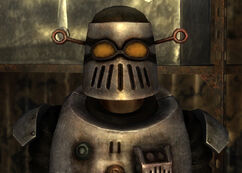 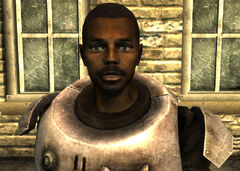 Scott, without his helmet

“Humans may be weak sometimes, but our creations are strong and pure. Something you'll never be!”

The Mechanist (real name Scott "Bean" Wollinski) is a 40-year old[1] man who controls various robots. He is fighting his nemesis, the AntAgonizer, in the town of Canterbury Commons and is dressed in the Mechanist's costume, a robot styled suit.

Scott "Bean" Wollinski was born to simple bean farmers, raised by his father until he was 15, who then sold him to a caravan merchant hoping he would have a better life. He traveled with the caravans for a few years working as an indentured servant. This is where he got the nickname "Bean" because his purchase was paid for with beans. He eventually bought his freedom and settled down in Canterbury Commons, where he lived a life of solitude, hiding in the electronics store, fiddling around with junk. After the AntAgonizer started showing up, he became the Mechanist to protect the town.[1]

He will attack the Lone Wanderer if he finds out that they work for the AntAgonizer (or if he suspects that they are working for her). If one convinces him they are not a secret agent, they can work with him. Not giving him the AntAgonizer's suit however will also cause him to attack the Wanderer. Alternately, he can be convinced to give up his life as the Mechanist, either through a Speech check or the Child at Heart perk, since he's causing the town more harm than good.

* Only if you convince him to stop being a superhero.

Scott Wollinski, also known as the Mechanist, only appears in Fallout 3.

The opening of the multiple doors after activating his coffee brewer may be a reference to a similar sequence iconic to the television series Mystery Science Theater 3000.

Retrieved from "https://fallout.fandom.com/wiki/Mechanist_(Fallout_3)?oldid=3381893"
Community content is available under CC-BY-SA unless otherwise noted.