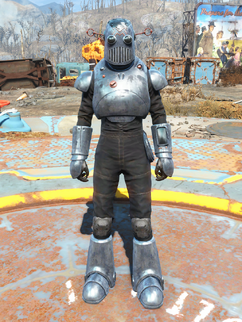 Reduces damage from robots by 15%.
Endurance +1

+1 to Charisma and Intelligence.

The Mechanist's armor and the matching Mechanist's helmet are pieces of armor in the Fallout 4 add-on Automatron.

The armor provides a Damage Resistance of 72 as well as an Energy Resistance 72, increases the Sole Survivor's Endurance by 1 and also reduces the damage the player character takes from robots by 15%. The helmet adds an additional 13 damage and energy resistance, while also giving +1 Charisma and Intelligence.

The ballistic weave mod can also be applied to the armor, bringing the potential total damage and energy resistance to 182 each. This results in a total of 195 DR and ER when fully upgraded and with the helmet equipped, giving it both the highest possible DR and ER of any outfit in the game. 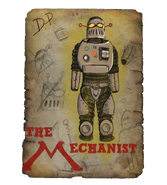 Drawing of the Mechanist

The Mechanist has her own Pip-Boy version
Español Русский Українська
Community content is available under CC-BY-SA unless otherwise noted.
Advertisement