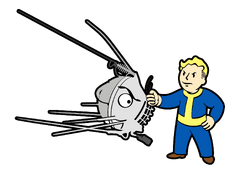 Mechanical Menace is a quest and achievement/trophy in the Fallout 4 add-on Automatron.

The quest is started as soon as the Automatron add-on has been downloaded and the player character reaches level 15. The Sole Survivor is notified to listen to the new caravan distress call that has appeared on their radio. Upon listening to it, they are notified to head over to an area near Wattz Consumer Electronics. Once there, they will find a multitude of robots battling it out beneath a highway. Once all enemy robots have been defeated, the player character speaks with Ada and the quest ends.

Retrieved from "https://fallout.fandom.com/wiki/Mechanical_Menace?oldid=3357723"
Community content is available under CC-BY-SA unless otherwise noted.
... more about "Mechanical Menace"
RDF feed
Has platform
PC +, Playstation 4 +  and Xbox One +