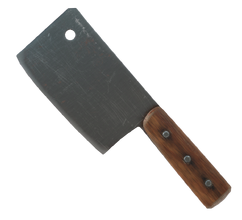 Fire in the Hole

The meat cleaver is a throwing weapon in Fallout 76, introduced in the Nuclear Winter update.

The cleaver was designed to chop hunks of meat for use in butcher's shops but has since been repurposed as a throwable weapon.

Retrieved from "https://fallout.fandom.com/wiki/Meat_cleaver?oldid=3469211"
Community content is available under CC-BY-SA unless otherwise noted.