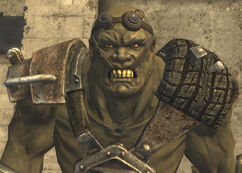 Mean Sonofabitch is a super mutant who serves as a sentry and does odd jobs for the inhabitants of Westside in 2281.

A first generation super mutant, Mean Son of a Bitch served the Unity with distinction until the fall of the Master in 2162. Wandering the wastes for decades, his luck eventually ran out somewhere near the Hub in the second half of the 23rd century. Taken captive by a group of mutant haters, he was tortured and mutilated, including having his tongue cut out[1] They refused to relent even when Klamath Bob offered to buy him from them.[2] He would have died, if it was not for Tabitha and her nightkin, who freed him from bondage.[3]

Eventually, Mean wandered into Westside. He remembered Klamath Bob well and decided to stick around, doing odd jobs for Westsiders and smashing Fiends whenever they attack with his mean super sledge. His very presence is enough to deter smaller raids, in fact.[4] Although some people steer clear of him, he doesn't seem to mind.[5]

* Cannot be pickpocketed or looted from Sonofabitch.

Retrieved from "https://fallout.fandom.com/wiki/Mean_Sonofabitch?oldid=3315684"
Community content is available under CC-BY-SA unless otherwise noted.