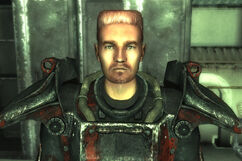 “I'd trust a wastelander to shine my power armor, and even that's pushing it.”

Protector McGraw is a member of the Brotherhood Outcasts and in charge of the operation at the Outcast Outpost at Bailey's Crossroads in the year 2277.

Interacting with outsiders with pleasant but direct conversation (instead of the usual contempt and condescension), McGraw is the head of operations in the Bailey's Crossroads section of the D.C. Metro Ruins. He is in charge of defending and exploring a recently discovered pre-War compound belonging to Virtual Strategic Solutions, Inc.. He deems the outpost worth risking his life for, as well as those of the patrol he commands.[1]

Protector McGraw appears only in the Fallout 3 add-on Operation: Anchorage.

Retrieved from "https://fallout.fandom.com/wiki/McGraw?oldid=3081303"
Community content is available under CC-BY-SA unless otherwise noted.