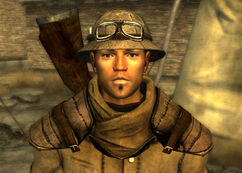 Primm
Camp Forlorn Hope (After completion of My Kind of Town) 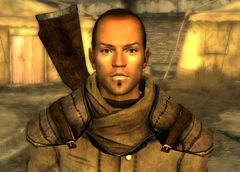 McGee without his helmet

“Do you think I'm blind? Of course I can see the Powder Gangers have taken over Primm. You have any other obvious facts you'd like to share? Don't fist fight with Deathclaws? No kissing Cazadores?”

Sergeant McGee is a member of the NCR living in Primm in 2281.

Born and raised in the Hub, McGee is a veteran non-commissioned officer of the 1st Company of the 5th Army Battalion, currently under Lieutenant Hayes. He's on his second tour of duty[1] and keeps his nose to the grindstone, just following whatever orders the lieutenant gives.[2] Lately, they were limited to keeping tabs on the convicts holed up in Primm and trying to keep them contained.[3][4] In fact he was on scout when Deputy Beagle was captured and marched into the Bison Steve Hotel, choosing not to act, instead citing lack of a long rifle and proper orders.[5]

Retrieved from "https://fallout.fandom.com/wiki/McGee?oldid=3270239"
Community content is available under CC-BY-SA unless otherwise noted.