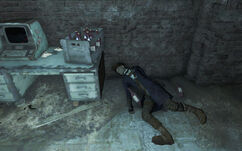 McGann in his final resting place

General McGann was the leader of the Commonwealth Minutemen for a short time in 2240.[1]

McGann was general of the Minutemen in 2240. He led the Minutemen after the beginning of their collapse in 2247, and was stationed at the Castle when it was taken over by mirelurks. He mistook the mirelurk queen for a behemoth leading a group of super mutants. Fearing that the mutants would make use of the fort's artillery, he locked down the armory, setting up traps and activating the tunnels' security measures. Finding out that he was trapped in the basement, McGann passed the time drinking the ancient Amontillado wine stored there until he died.

General McGann appears only in Fallout 4.

Retrieved from "https://fallout.fandom.com/wiki/McGann?oldid=3318183"
Community content is available under CC-BY-SA unless otherwise noted.