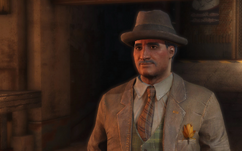 (These relations only apply to the human McDonough, not M7-62)

“You devious, rabble-rousing slanderer! The level of dishonesty in that paper of yours! I'll have that printer scrapped for parts.”— McDonough speaking to Piper Wright

Mayor McDonough, unit designation M7-62,[3] is the mayor of Diamond City and a secret Institute agent in 2287.

A larger than life figure in both the figurative and the literal sense of the word, McDonough has been running Diamond City for years, maintaining it as a prosperous center of commerce and hub for the Commonwealth. In reality, the city's mayor is a synth infiltrator; an Institute plant. He monitors developments in the Commonwealth and compiles reports on matters of possible interest to the organization.[4] His only point of contact was Kellogg as the Institute lacked another way to receive the messages from him.[5]

The human McDonough was the brother of Hancock, the leader of Goodneighbor, and the son of Patrick and Martha McDonough.[2] He was described by Hancock as "the standard big brother - entitled, punchy, liked to shove rotten tatoes down my shirt and slap my back."[1] He was abducted and replaced by the Institute some time before 2282.[6][7] The goal was simple: To install an Institute agent at the head of the largest settlement in the Commonwealth. The decision to pursue a political career came as a surprise to Hancock, but he didn't stand in his way, at least not until McDonough started campaigning for the 2282 election.[8]

He ran on the Mankind for McDonough ticket, promising to remove ghouls from Diamond City.[9] His program was supported by the Upper Stands residents and eventually earned him the mayoral position. His anti-ghoul decree was enacted immediately, with McDonough's inaugural speech triggering a pogrom of ghoul families. Hancock tried to protest, but the Mayor simply replied that, while he has no ill will towards ghouls, he could not defy the will of the people and smiled, forever estranging the two brothers. Hancock no longer recognized the brother he grew up with.[6]

John left Diamond City and his bigoted brother. He tried to help the victims of the pogrom, forced to survive in the desolate city, and resettle them in Goodneighbor, but most of them couldn't get used to its lifestyle and eventually disappeared.[10] Meanwhile, as mayor of Diamond City, the synth has been carrying out a mission to infiltrate the city and its inhabitants, who are oblivious to his true nature as an Institute agent. The synthetic mayor took efforts to conceal his secret allegiance to the scientific community from his people, even though an observant journalist, Piper Wright had caught a whiff of his plans and published the information in a news story, titled "The Synthetic Truth." Piper has gotten on the bad side of the mayor as a result of her sensationalizing rumors of him being a synth, which has led to her receiving a temporary ban from city limits.[11] His other issue is that his anti-ghoul rhetoric is running out of steam, especially with the foundation of The Slog. Peaceful, prosperous ghoul settlements will inevitably breed people who don't consider ghouls monsters and eventually allow someone to challenge McDonough's bigoted policies and remove him from power. In his view, the Institute should consider engineering a situation where the ghouls are "less friendly".[9]

McDonough's own long term goal is to transfer within the SRB and become a courser. He is not aware that his synth body would be incompatible with the lifestyle of a courser, and his handlers consider him expendable: If he was ever outed as a synth, he would be cut loose with an estimated survival time of two weeks.[12]

McDonough has been a popular mayor among merchants and the wealthy upper stands residents, due to his emphasis on keeping Diamond City prosperous and safe, but something of a conflicted figure among the lower field population due to the circumstances of his election and his refusal to investigate the recent spate of kidnappings allegedly orchestrated by the Institute, which has sparked mass paranoia within the community.

Mayor McDonough appears only in Fallout 4.

Retrieved from "https://fallout.fandom.com/wiki/McDonough?oldid=3496779"
Community content is available under CC-BY-SA unless otherwise noted.