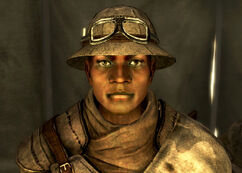 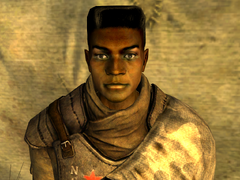 McCredie without his helmet

“I've been here since the first push into Vegas. Back in the days this camp was the hotspot for conflicts with the Legion, raider tribes, you name it.”

Sgt. McCredie is an NCR sergeant in charge of Camp Golf in 2281.

A career soldier, McCredie volunteered to join the NCR Army at 16. He has stayed in ever since, saying simply, "Man, it's my life," when asked by the Courier. McCredie's professional competence and enthusiasm for a soldier's life make him a skilled and capable non-commissioned officer, but he has not risen as high as it would seem he should have after so many years of service. The Courier can remark on this, prompting McCredie to respond that leadership positions get increasingly bureaucratic as one moves up, and that he did not "join the Army to drive a desk."

McCredie has been stationed at Camp Golf for some time as of 2281, being that it is part of the the front line between the NCR and the Legion. One of the teams he is in charge of is nicknamed the "Misfits," a group of foul-up soldiers who have bottomed out in their Army careers. McCredie has grown greatly frustrated after so many failed attempts at getting them to straighten up, and will welcome the Courier's offer of assistance if it is made. McCredie remains convinced the Misfits can be made into proper soldiers, even if he cannot imagine how.

Retrieved from "https://fallout.fandom.com/wiki/McCredie?oldid=3124408"
Community content is available under CC-BY-SA unless otherwise noted.