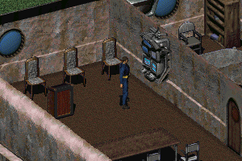 “I'm not unsympathetic to the plight of the ghouls. They have certainly suffered enough...”

Senior Council Member McClure (also called councilman and councillor) is the spokesman of the Vault City Council in 2241.

He is one of the most important politicians in the city, second only to First Citizen Joanne Lynette herself.

McClure and Lynette often oppose each other, as McClure is more rational and less ideological than the first citizen. Around 2241, some citizens have petitioned McClure and the council to override some of the first citizen's decisions, which created quite a stir.

McClure appears only in Fallout 2.

Retrieved from "https://fallout.fandom.com/wiki/McClure?oldid=3366067"
Community content is available under CC-BY-SA unless otherwise noted.