The Screams of Brahmin

Fallout: New Vegas
“There's been things of a disturbing nature going on at the McBride Corral. Seems every night one of their herd meets a most unnatural death, and always there's holes all over the body.”— No-bark Noonan

The McBride house is the home of Alice and Dusty McBride, part of their brahmin farm in the town of Novac.

The McBride house consists of four rooms, including a kitchen, bathroom, bedroom, and living area. The couple has decorated the exterior of their home with brahmin skulls, including two flanking the front door and one on the mailbox. A corral with several brahmin is located next to their home to the south.

The McBride house appears only in Fallout: New Vegas. 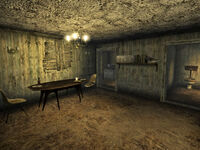