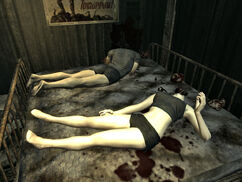 “The Powder Gangers stole into town at night and murdered my sister and her husband, the sheriff, in bed, while I was sleeping in the office.”— Deputy Beagle

Sheriff McBain was the sheriff of Primm who, along with his wife, was killed by escaped convicts in his sleep in late October, 2281.

McBain was known as a brave man and a good sheriff that protected Primm.[1] His and his wife's murder was witnessed by Beagle who proceeded to spy on the convicts instead of doing anything else, [2] leaving the McBains' decapitated corpses behind at the sheriff's office to rot. They were only given a proper burial by the townsfolk of Primm once peace was restored.

Retrieved from "https://fallout.fandom.com/wiki/McBain_(male)?oldid=3139216"
Community content is available under CC-BY-SA unless otherwise noted.