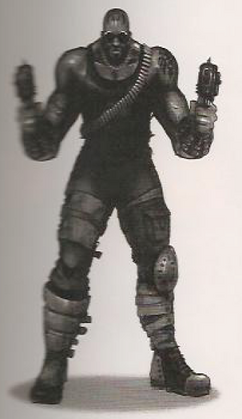 Maxus was going to be one of the four playable characters in the canceled Fallout: Brotherhood of Steel 2.

He never liked the quiet life. When he was a teenager, he ran into a Brotherhood of Steel Paladin, who convinced him to join the Brotherhood. While Maxus doesn't like Small Guns too much, the large guns in the BoS arsenal impressed him. He is the only link to Fallout: Brotherhood of Steel, as his father is Cyrus, one of the playable characters in the first game.[1]

Similar to Cyrus, except a bit smaller, he wears jeans and a simple T-shirt.

Maxus can use Big Guns, but cannot use Dual Weapons (despite him being shown with them in official artwork). He also has a disadvantage with Small Guns. He gets a good opening advantage to Melee Weapons. Cannot set traps.[1]

Maxus was going to appear in Fallout: Brotherhood of Steel 2.

Retrieved from "https://fallout.fandom.com/wiki/Maxus?oldid=3326706"
Community content is available under CC-BY-SA unless otherwise noted.