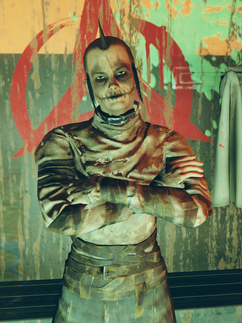 Maximum Maddie is a slave competing in fighting tournaments at the Watoga Civic Center in Appalachia in 2103.

A former raider, Maximum Maddie was a cannibal, having killed and eaten several children. This led to her being exiled and then sold into slavery, being forced to compete in slave tournaments organized by Sargento's gang in order to win her freedom.[1]

During the quest the Ol' Weston Shuffle, if the player character wins their matches up to that point, Maximum Maddie is the last competitor left standing against the Vault Dweller in the third round.

The Ol' Weston Shuffle: Before the third round begins, Johnny Weston will offer to make a deal with Maddie. If the plan is approved by the player character, Johnny will ask Maddie to throw her fight in exchange for disabling her slave collar and guaranteeing her freedom. However, in reality, Johnny does not disable her collar, saying that she "deserves to die." Maddie's collar will then detonate if the player character wins the third round.

Maximum Maddie appears only in Fallout 76, introduced in the Wastelanders update.

Retrieved from "https://fallout.fandom.com/wiki/Maximum_Maddie?oldid=3405138"
Community content is available under CC-BY-SA unless otherwise noted.