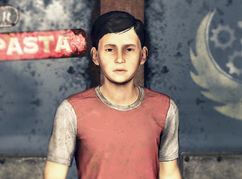 Maximo "Max" Leone[1] is a Brotherhood refugee in Appalachia in 2103.

Max and his older sister Marcia Leone are refugees at Fort Atlas after their parents were killed in a raider attack, who had gotten their hands on Brotherhood weapons.[2] Unlike his sister, Max idolizes the Brotherhood and sees them as heroes, wanting to become a member to fight off threats to others. He believes the Brotherhood will save the world, but also likes the power armor they utilize.[3] Maximo is adamant about his training, wanting to become an Initiate by impressing Leila Rahmani,[4] and considering becoming a Knight to be like Daniel Shin, believing he will become best friends with him one day.[5] He has also befriended Odessa Valdez, playing hide and seek with her,[6] as well as referring to her on a first-name basis.[7] He is also a fan of the Armor Ace and the Power Patrol board game, asking others if they would to play it with him.[8]

Maximo was originally named "Matteo," and his voice type is still named as such.

Maximo Leone appears only in Fallout 76, introduced in the Steel Dawn update.

Retrieved from "https://fallout.fandom.com/wiki/Maximo_Leone?oldid=3419690"
Community content is available under CC-BY-SA unless otherwise noted.