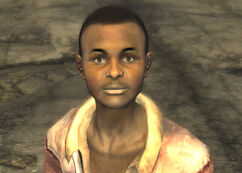 Freeside, in front of Mick & Ralph's

I Could Make You Care
Reach for the Sky, Mister!

“Reach for the sky, mister”

Max is a child residing in Freeside in 2281.

He can be seen in Freeside chasing a girl named Stacey with Euclid's C-Finder.

Max will sell Euclid's C-Finder upon request for 1000 caps, but by passing a Barter check of 45, will sell it for only 20 caps, and by passing a Speech check of 60 will give it to the player character for free.

I Could Make You Care - If you choose to complete the quest by obtaining Euclid's C-Finder, it will need to be bought from Max.

An additional dialogue option exists which would allow the player to obtain Euclid's C-Finder for free. However, this dialogue option requires the cut Child at Heart perk, which was removed owing to the small number of children in the Mojave Wasteland.[1]

Retrieved from "https://fallout.fandom.com/wiki/Max_(Fallout:_New_Vegas)?oldid=3502889"
Community content is available under CC-BY-SA unless otherwise noted.