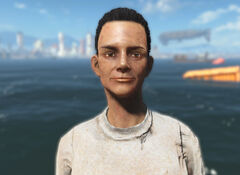 Maven is a deceased member of The Railroad in the Switchboard in 2287.

Maven worked for the Railroad during the time they were located in the Switchboard. When the Switchboard was attacked, she was able to hide a small cache before being killed by synths. The hidden stash is inside the steam pipe by the box marked with the Railroad sign, just a bit further past her body.

She is found dead during the quest Tradecraft inside the Switchboard, likely killed by nearby turrets.

Maven appears only in Fallout 4.

Retrieved from "https://fallout.fandom.com/wiki/Maven?oldid=3122945"
Community content is available under CC-BY-SA unless otherwise noted.