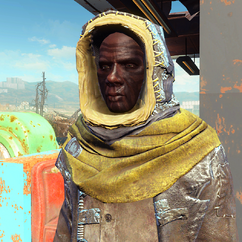 Maurice Turner is a Hubologist in Nuka-World in 2287.

Maurice is an older follower of Hubology and is less trusting of new recruits than most Hubologists. He is worried that they are not truly dedicated to the cause or that they will steal from them. If the Sole Survivor assists the Hubologists during Trip to the Stars, he will become more accepting of them, saying that they "aren't so bad after all."

Maurice Turner appears only in the Fallout 4 add-on Nuka-World.

Add a photo to this gallery
Retrieved from "https://fallout.fandom.com/wiki/Maurice_Turner?oldid=3310729"
Community content is available under CC-BY-SA unless otherwise noted.