Friendly
“Hm... Maul has not thought these thoughts. But human is right. You are strong. Maybe even stronger than Grognak. And if human can move on, maybe Maul can too.”

Maul is a super mutant lite ally in Appalachia.

Various types of meat and meat-themed plans can be bought from Maul, and the buff he has to share will improve the player character's Strength, increase their rad resistance, and make melee weapons feel lighter.

He was unlockable upon reaching rank 50 of The Unstoppables vs The Diabolicals season, and a plan for him was released with the Night of the Moth update.

Maul is a super mutant who is searching for the fabled fictional hero, Grognak, in order to kill him, because Maul wants to prove his strength.[1] Maul apparently believes that Grognak is real and takes the Unstoppables comics very seriously. He has all 14 Grognak books, five Unstoppables issues, two board games, and has beaten Grognak & the Ruby Ruins twice.[2]

Maul once had a "stupid" dog friend named Bloppo whom he found in a cage. Maul felt the dog was too pitiful to kill because the dog was so frail, and the dog was too puny for Maul to bother eating. Maul began to bond with the dog, and decided to try to refrain from eating and killing others, with the exception of killing Grognak. Bloppo introduced Maul to the world of Grognak the Barbarian by way of digging up an old book. Bloppo passed away after he was taken from Maul by other super mutants, with Maul unable to save him. When expressing his thoughts on burying his friend, he says that his inability to prevent Bloppo's death was a sign of weakness. In Maul's view, Grognak was strong enough to protect his friends, and that if he becomes as strong, he would be able to do the same.[3][4]

Maul knows Grahm.[5] He also believes in the free market and says that "de-capitalists" cannot stop him.[6] 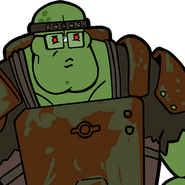 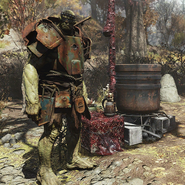 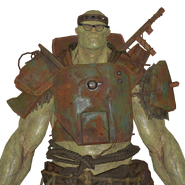