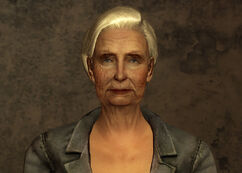 A Bit of Slap and Tickle

“Well, don't just stand there. I ain't getting any younger.”

Maude is an elderly female prostitute living in the Mojave Wasteland in 2281.

Maude works as a prostitute for Pretty Sarah at the Casa Madrid Apartments. She works alongside Jimmy and Sweetie, and is by far the oldest of the three. Although seemingly too old to be a prostitute, she is kept around for her experience and good rates.

A Bit of Slap and Tickle: If the Courier is male, she can be hired as a prostitute for 75 caps.

When asked what she thinks of Jimmy, she comments that he is okay, considering "he is one of those," demonstrating a distaste for Jimmy's homosexuality and suggesting that she is homophobic.[1]

Retrieved from "https://fallout.fandom.com/wiki/Maude?oldid=3124276"
Community content is available under CC-BY-SA unless otherwise noted.